Luke Keaney spent a decade representing Donegal's Gaelic football teams at various age-grades up to and including senior level. When he began undergoing treatment for career-ending injuries in early 2017, he had to look beyond his own County Board in the search for financial assistance.

Comfortable in admitting that he may never accept the premature cessation of his inter-county career, Luke Keaney, a 27-year-old who isn't ever likely to play Gaelic football again, spoke on Wednesday's OTB AM about the circumstances surrounding his retirement.

"The last game I represented Donegal was the All-Ireland final in 2014 against Kerry," he recalled, "and my last game with my club Four Masters was in 2016."

Shortly thereafter, Keaney underwent a series of surgeries that would facilitate his ability to continue walking, but could not salvage any semblance of his footballing career. Concisely, this came as a result of the mismanagement of Keaney's training and playing schedule.

From his call up into Donegal's Dr McKenna Cup senior panel in 2011, Keaney could be found representing his county or club at various age-grades. Furthermore, as a student of UCD and subsequently, UUJ, his sporting commitments throughout his early 20s were colossal and ultimately detrimental to his health.

Called into the Donegal panel by Rory Gallagher ahead of the 2017 season, Luke Keaney was presented with results of an MRI scan on his hip that would ultimately initiate a series of intricate, expensive surgeries.

"For me, I had to worry about who was going to pay for it and how I was going to get that money back," he admitted on Wednesday's show.

"You can imagine that there was a great expense to all of my operations; five procedures in one year, flying across to see the top surgeon in Europe, you have to get physio, S & C and learn how to walk again.

"All of that there comes at a large price and I was very lucky that I had the support of the GPA."

Through a collaborative GAA/GPA medical and surgical intervention fund, Keaney, as a former senior inter-county player in need of assistance, received funding for four of his five surgical procedures and the necessary treatment that followed.

Strikingly, the Four Masters clubman had to turn to the GPA for assistance in accessing the fund after the Donegal County Board failed to assist him despite his having reached out to them.

There was no process. I had to get the money myself, and I got it, and I had no support from them. The GPA stepped in and presented my case to get awarded the funds to cover the injuries 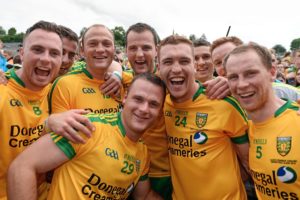 "There was no process," explained Keaney of his attempts to engage the Donegal county board with the hope of gaining their assistance. "I had to get the money myself, and I got it, and I had no support from them.

"The GPA stepped in and presented my case to get awarded the funds to cover the injuries."

After formally contacting the county board, Keaney was informed that the county treasurer would liaise with his club, Four Masters.

However, no communication was forthcoming and Luke Keaney footed the bill for the first of his five procedures - €13,000 in total. Thereafter, he was granted access to the GAA/GPA fund set up to assist former players as they contend with injuries.

"Let's not forget, I'm going to have to get my left hip replaced in maybe 10-years," he explained. "The resurfacing only has a 10, 15-year life-span depending on how you look after it.

"This is the realisation I have to face.

Three years since he had direct involvement with the Donegal senior panel, Keaney admitted that there has been no real contact between himself and the county board.

"There is none," he remarked of the current relationship between himself and the county board. "There has been no follow-up, whether that is even an email or letter just to check in and that is probably something that I still can't really understand."