What is a close contact in GAA? | ‘It would be nice if the HSE clarified that’

The GAA and the HSE need to clarify what constitutes a 'close contact' in the context of outdoor sport, according to the Sunday Times’ Mick Foley.

In the wake of the ongoing story surrounding two Clare players being deemed close contacts of players in Wexford that tested positive for COVID-19, the issue surrounding exactly what constitutes a close contact has been brought up.

It has been suggested by Clare management that the players were identified by Wexford players, however the GAA and HSE have confirmed that it was a HSE decision.

This is in spite of the fact that it is unlikely that the Clare players spent more time in close proximity with the positive players than their teammates, and yet the teammates were not deemed to be close contacts.

Speaking on Tuesday’s Off The Ball, Foley was concerned about some of the confusing aspects of the decision by the HSE to name the Clare players as close contacts.

“There are one or two just bewildering things about this, and it is all around close contacts,” Foley said.

“Our understanding for quite a while now is that when you are playing any sport outdoors, close contacts don’t come into it. You are marking a guy; you are not a close contact.

“That was when everything had to be outdoors [and subsequently ruled as being over the top]. That is my point!

What is a close contact in a GAA context?

Foley mentioned that the GAA have listed a number of possible scenarios, none of which take place on the field during a match.

“The GAA protocols are,” Foley said, “potential close contact scenarios are if you are in a gym, or any other indoor training facility, if you are in a dressing room, pre- or post-match meals, tactical meetings… if you are travelling to and from games, or if you are staying overnight somewhere.

“It brings up the question, if two of the Wexford players had been diagnosed with COVID last week, how come all of that Wexford squad hadn’t been automatically deemed close contacts?

“Why did it take for a third case for them to be deemed close contacts, and then the Kilkenny game last week was postponed.

“Why were two Clare players picked out in a scenario where close contacts are not meant to apply, on the field?”

With the onus being placed firmly on the HSE to determine close contacts, Foley would like clarification of exactly how two Clare players were deemed to be close contacts, as it could have major repercussions for the rest of the season.

“The GAA have said that this is the HSE’s call; the GAA don’t decide who are close contacts. Now we have these two differing versions of how the HSE came to that conclusion.

“It would be nice if the HSE clarified how this occurred. There may be privacy issues around that though.

“It would be probably beholden on the GAA now just to clarify again precisely the protocols around close contacts.

“If it is the case that the HSE can call out guys as close contacts because the guy that they were marking tested positive for COVID a few days later, that obviously has a huge impact going forward.” 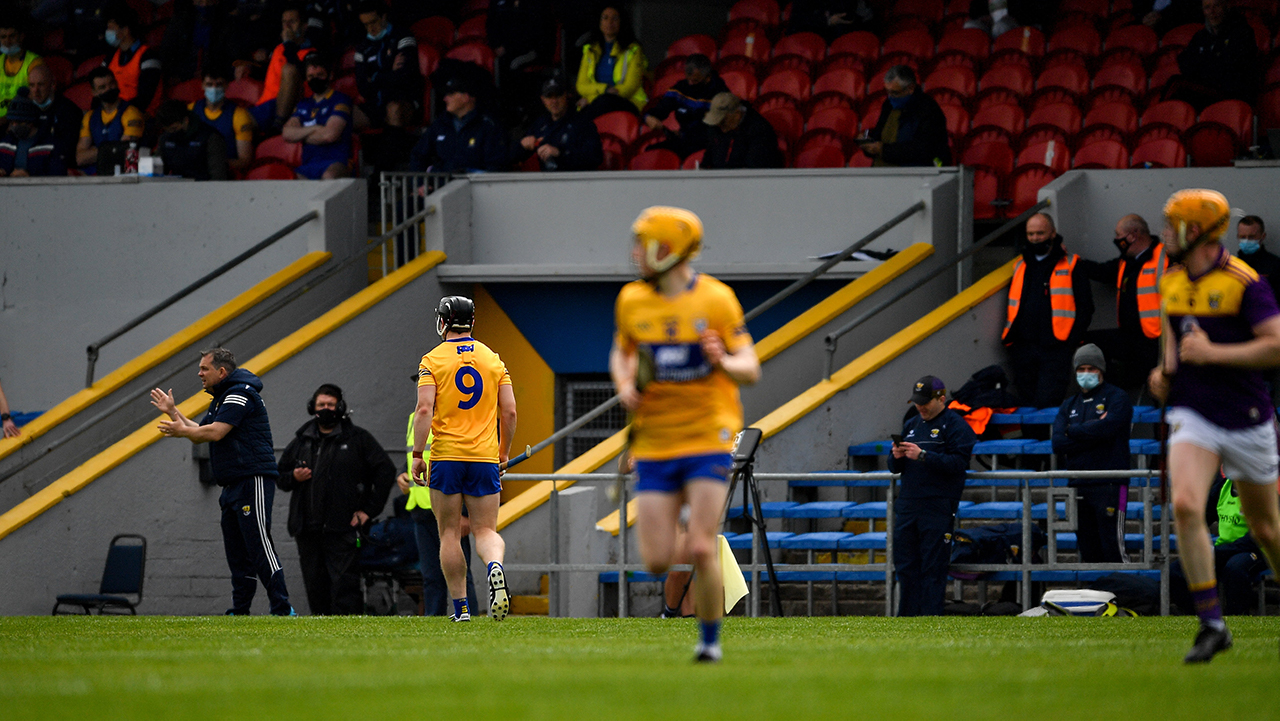 Wexford manager Davy Fitzgerald, left, as Tony Kelly of Clare, 9, leaves the field during the Allianz Hurling League Division 1 Group B Round 2 match between Clare and Wexford at Cusack Park in Ennis, Clare. Photo by Ray McManus/Sportsfile

'We just need the clarity!'

Foley questioned whether the idea of a close contact, particularly in sport, needs to be redefined so as to avoid this situation in the future.

“The main issue here is, do we need to redefine what ‘close contact’ means in a GAA context?” Foley said. “I mean, the HSE’s definition of a close contact.

“It has been conclusively proven and shown that the chances of contracting COVID-19 on the field, during a game, from standing by a guy is practically zero.

“It is not a close contact scenario, it is not. That was the bewildering bit for me.

“How can you pick two random guys, and not the 20-something guys coming from Wexford, who stayed overnight and played the game, and were in the dressing room?

“They were all in close proximity. How come they weren’t deemed close contacts? This isn’t picking on Wexford or Clare; this stuff has ramifications for every county and club going forward.

Gary Brennan brings the curtain down on Clare football career