After announcing his decision to leave Carlow's coaching team, Steven Poacher revealed the constraints that Turlough O'Brien's side have been working under in recent seasons.

Occasionally maligned for their defensive playing style, Steven Poacher's involvement with Carlow's senior footballers coincided with a significant upturn in the unfancied Leinster county's performances in both the league and championship.

Citing the physical and emotional strains of regularly travelling from his home in Down to Carlow as a reason for his decision to now step away, Poacher, in the midst of criticising the rushed introduction of a tiered football championship on Tuesday's OTB AM, detailed the constraints that Carlow's footballers have been working under.

"I think it is an absolute and utter disaster," he said of the GAA's recent change to the championship structure. "Every president wants to leave their mark and [John] Horan wanted to leave his mark.

"The bottom line for me is the financial irregularities within the counties.

"I'm looking at Carlow over the last couple of years and I have to be honest with you, Turlough O'Brien has soldiered with Carlow for five years without any financial aid whatsoever.

"He does that because he is a proud, passionate Carlow man, but he does it too because the county is financially restricted."

We had no GPS trackers and I know for people on the outside that that might not seem like a big thing, but it is massive. To monitor workloads, monitor training ... it is huge 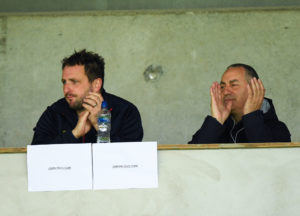 Exploring the reality of these constraints in the day-to-day planning of Carlow's training sessions, Steven Poacher highlighted how far behind some teams they found themselves.

"We had no GPS trackers," he admitted. "I know for people on the outside that that might not seem like a big thing, but it is massive.

"To monitor workloads, monitor training ... it is huge. There are school teams in Tyrone that are using GPS trackers, school teams!

"As an inter-county side, we couldn't literally afford them. That's what we were working with.

"I had to do all the video work ... chopped the videos up and dissected them which could take four or five hours at a time.

In an effort to bridge the gap between Carlow and their wealthier contemporaries, Poacher explained how the management team had approached the GAA for help.

"There was one night where Abbotstown was touted for the Dublin-based players to do their strength and conditioning so they didn't have to travel back home. The lads went over to the gym, everything was fantastic, then two weeks later they went back and Dublin GAA had cleared the gym out because it was their equipment.

"These things are very, very challenging for the smaller counties. People don't see this from the outside. They look in and think it is like any other inter-county set-up."

Ultimately, Carlow were left fighting with what meagre resources they could generate closer to home. If any change is to be brought about, Steven Poacher remains adamant that a restructuring of the financial landscape will be necessary.

You can watch back Steven Poacher's full interview on OTB AM here.