Vinny Perth and David Meyler sat through an iconic Irish World Cup game with Nathan for the laste...

Vinny Perth and David Meyler sat through an iconic Irish World Cup game with Nathan for the lastest Classic Game Club on Off The Ball on Thursday.

The trio watched back the incredible Irish World Cup '94 win over Italy.

Revisiting celebrated history can be a tricky task, try explaining to the Generation Z crew that Friends was funny and just "of the time." 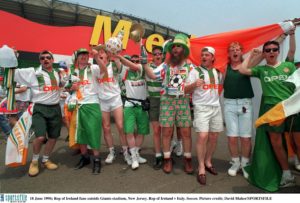 Former Republic of Ireland international David Meyler was only five years old so he doesn't remember. While Dundalk boss Vinny Perth recalls the World Cup still being football's main event. It had not been passed out by the Champions League yet.

As Sky Sports was in its infancy, daily football for a month was also a relative novelty at the time. With no internet, there was obviously no social media.

Off The Ball listeners have this week have been treated to a full-on Denis Irwin love-in. The Corkonian full-back has been beyond reproach. Danny Higginbotham claimed he was the best he played with and John Giles put Irwin in his lifetime Manchester United XI.

Vinny Perth arrived to halt the love-in, somewhat. The Dundalk manager reckons the performance in the Giants' Stadium by Irwin would have had the Twitterati in a frenzied rage.

"People talk about Denis Irwin, ex-players like Higginbotham this week [on Off The Ball] saying he's the best he's seen other than [Ashley] Cole.

"Irwin kicked the ball to them, particularly early in the game so many times and there were misplaced passes.

"If that game was taking place in the modern world, you would have Twitter going absolutely bananas at him. Two minutes into the game, kicking the ball away and it going over the end line."

Perth acknowledges this is part of a modern trend to dissect the minutiae of games tactically, rather than just take a little bit of pleasure from the experience.

"It is overanalysed now, we don't just tend to sit back and enjoy the game", said Perth.

"There would be a gif created of Irwin just kicking the ball out of play within five minutes of the start!"