Paul Rouse joined Off The Ball for his weekly History of Sport in Ireland series - this week's chat covers the 19th century and the effect of the famine on sport.

Prior to the famine, Rouse reminded listeners how the industrial revolution did not impact the bulk of the island of Ireland in the same way as the UK.
"There was slower urbanisation in Ireland. Belfast began to grow, Belfast was a small town of 10-15,000 people in 1800.
"By 1900 there were 350,000 people living in Belfast. They were drawn to the city by the linen industry and the ship-building industry and the steel-works and all of those spin-off industries.
"Dublin also grew but at a much more sedate pace, it wasn’t driven by industrialisation, it was still mainly a services town."
"At the start of the famine, Ireland was only 15% urbanised. This was much more regionalised in Ulster," says Rouse.
That lack of urbanisation was one of the reasons the famine had such an impact on Ireland, that the population still feels to this time.
"The great defining moment in modern Irish history in terms of population and demographics was the famine." 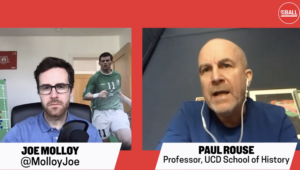 The brutal numbers are stark says Rouse: "The reality of the famine was a million dead and a million emigrated within five years.
"Then decade, after decade of emigration, destroyed the population of Ireland.
"Ireland is the only country in the western world to have a lower population now than it did in the middle of the nineteenth century."
In a fairly insignificant footnote to this misery, sport was impacted hugely.
"It changed how sport worked in the countryside and it changed the spread of sport," notes Rouse.

Rouse singles out hurling as being altered by the famine, both in terms of who played and in what circumstances.
"Hurling was particularly affected by the famine with a huge change in profile and demographics of participants.
"The great illustration of change in Ireland was Hurling and the manner of change between 1800 and the famine but also after the famine.
"The truth of it is that hurling went from being a game that was prospering in the 1790s that by the 1870s was on the margins of Irish life."
Rouse laid out the reasons for that near obliteration of the sport.
"Partly it’s to do with the fact those lords and ladies who had previously given patronage to hurling in their big houses.
"They constructed the teams to play matches against each other and gambled on the matches. those rich families drifted out of organising hurling matches."

There was a notable change in who played the game by the time the famine came about.
Rouse says: "It did survive as the game of peasantry. Of ordinary people across Ireland for much of the 1820s and 1830s into the 1840s but again the famine wreaked havoc in those areas where hurling was particularly strong."
"A crisis in society can accelerate trends, so hurling was already beginning to move to the margins and after the famine through the 1850s and 1860s, it came under enormous pressure.
"It did so for a variety of reasons, firstly the state was becoming more powerful. There were more police, better organised and they moved to stop the violence in the game of hurling."
Rouse recalls several violent incidents documented by media in the latter 19th century due to hurling games. Either happening at the gathering or violence as a result of a hurling game.
The game was marginalised at the time but the flourishing media and its distribution through evolving technology was among the reasons for saving the game.

It wasn't long until the GAA was established and the game was preserved forever, but the famine cmae close to adding hurling to its long list of fatalities.

"A world for men, by men.." | Paul Rouse on the evolution of women's sport

Paul Rouse on why rugby split in two - History of Sport

'We cannot let hurling die, this is centuries of our tradition" | Paul Rouse