Frankel or Sea The Stars? | Mick Kinane knows who he would pick

Sea the Stars and Frankel, the Ronaldo and Messi of recent horseracing folklore, and like the footballers, a subject of debate among racing fans.

Mick Kinane rode Sea the Stars along with many of the great horses particularly in the late 1990s and early 2000s including the great High Chaparral for Sir Alex Ferguson.

Mick Kinane was emphatic in his answer when asked about Sea The Stars against Frankel by @Ui_Maine on #fridaynightracing @hriracing pic.twitter.com/zMjij4oqxW

Kinane was recently a guest on Friday Night Racing and Johnny Ward put him on the spot. The hypothetical race in mid-June, at the Curragh, over ten furlongs, Sea the Stars against Frankel, who wins?

"Sea the Stars" is Kinane's immediate response. "There was never a horse that could drag him to his limit. Sea The Stars was never tested.

"Like Sea The Stars after the Arc, my fella had gone asleep pulling up and Cristophe Soumillion came up behind me to pat me on the back, and he woke up from his slumber and ran away with me down the back straight to the seven-furlong gate. 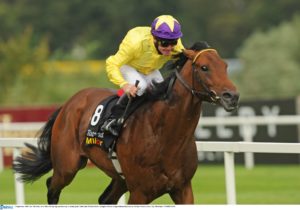 "He thought the race wasn't over, so that'll tell you how much he had left. There was never a horse that could drag him out of it."

"It would have taken a Frankel"

Kinane thinks only one horse could have troubled Sea The Stars: "It would have taken a Frankel to do it and I would have expected him (STS) to win."

Timeform, the horseracing rating company, like the official handicapper, are emphatic in which is the better horse. They both disagree with the great jockey and make Frankel the superior of the pair, but that doesn't stop the debate.

Frankel was a perfect 14 from 14 on the track, but Sea The Stars had the perfect season in 2009. Six group one wins in six months across three countries over three different distances. Frankel didn't race outside the UK or beyond a mile aged three and only ran four times at the top level that season.

The nature of Frankel's performances were more eyecatching than John Oxx's horse, but Sea The Stars had a more efficient style, making assessment more difficult.

Sea the Stars didn't race at the age of four, whereas the public got to know and love Frankel as he matured and stepped up in trip. His win at York over Breeders Cup winner St Nicholas Abbey in the International was one of the great performances in a career littered with breathtaking wins.

The pair never raced against each other as Sea The Stars retired ten months before Frankel made his stunning racecourse debut. They are connected not just for the sake of argument but also share bloodlines, Frankel is by the record-breaking stallion Galileo who is a half brother to Sea the Stars.

The horses even have competing legends, Frankel famously passed out the Cambridge train in a piece of morning work, while the legend goes that Sea The Stars was the only horse who could stop Mick Kinane from retiring before he did.

Officially Frankel was the better of the pair, but given the thoughts of the arguably Ireland's greatest ever flat jockey, maybe it's closer than the handicapper thinks it is.