The Chiefs finished with the third-best offence in the league during the regular season. They were behind Lamar Jackson's Baltimore Ravens and the Dallas Cowboys.

Yet, despite not reaching their full potential, the Chiefs did win the Super Bowl in the end. And now they enter the 2020 season with a realistic chance to be better than last year. Mahomes is 24 years old. He's technically still developing. Travis Kelce is 30, in his prime. Sammy Watkins and Tyreek Hill are both 26. The Chiefs weren't relying on ageing players to win last season. The foundation of that team is returning and the Chiefs have added to it with rookie running back Clyde Edwards-Helaire.

It's rare that a great quarterback lands with a great coach and a great supporting cast.

For example, Matt Ryan won an MVP in 2016. The Falcons reached the Super Bowl and should have won it. Ryan is a very good quarterback, but he wasn't especially good that year. Shanahan and a supporting cast that excelled beyond expectation inflated Ryan's individual output. The offence was historically good with a quarterback who was just above-average at the time. Ironically, Ryan has had multiple seasons since then when he was much better and his supporting cast dragged down his output.

If every part of the Chiefs offence plays to expectation, they should have a historic year. The same group, with Edwards-Helaire added, the growth of Mecole Hardman and the assumed health/consistency of Mahomes will far outperform what they achieved in 2019.

The quarterback is the most important individual on the field on a given play. But he's still just one person. There are 22 players on the field, if the quarterback controls 15% of the outcome, it's a huge number. A great offensive line or a great offensive coordinator is just as impactful as a great quarterback. As such, each aspect of each offence needs to have its importance weighted in any projections or rankings. 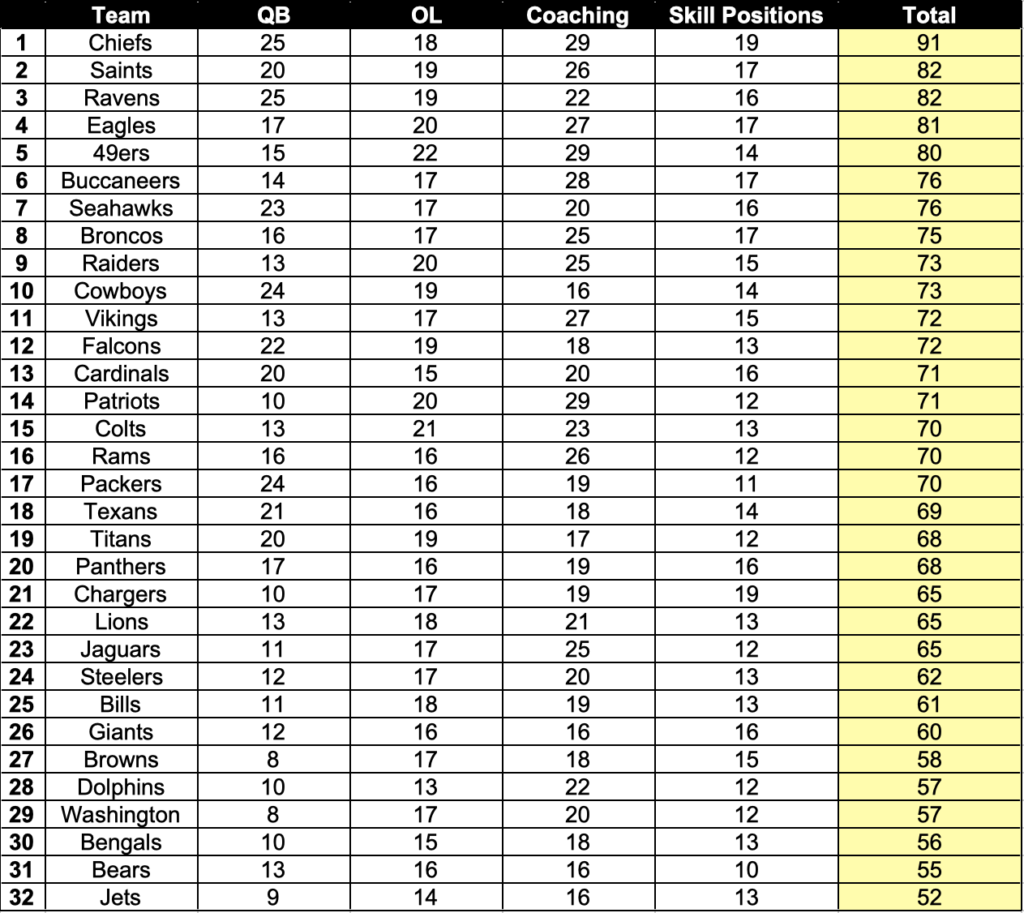 Skill position players, while more famous than offensive linemen have the least impact on each unit.

The offensive coordinator/head coach on each team designs and calls the plays that the offence runs. A coach such as Jason Garrett kills his team by making bad decisions situationally but also by using antiquated play designs that take away space instead of creating space. Andy Reid is on the complete opposite end of that spectrum. He makes smart decisions situationally and runs a spread offence with beautifully-designed route combinations.

Kyle Shanahan is right there with Reid as one of the best offensive coaches in the league. Shanahan has a completely different style of offence, but it's designed and called just as impressively. Shanahan uses misdirection play designs a lot to create wide-open throws for his quarterback.

Every element of each offence relies on the other three. They prop up and pull each other down depending on their effectiveness. It's not always easy to see, but the best way to understand it is by looking at how often each quarterback faces pressure in the pocket or has to throw into a tight window.

While the Chiefs are favourites to be the best offence in the league next year, there is plenty of competition at the top.

Drew Brees is making all the wrong headlines at the moment. His off-field issues aside, Brees will have to prove he can hold up for the playoffs in spite of his age next season. The Saints have offset his decline by adding Emmanuel Sanders to the receiving corps. Sanders and Michael Thomas will be the best starting receiver tandem in the NFL next year. Jared Cook is a capable complement at tight end, while Alvin Kamara hopes to rebound after last season.

Sean Payton is a genius in terms of offensive play design and play-calling.  His staff as a whole is well-established at this point. The big concern entering the season is the interior of the offensive line. The underwhelming Andrus Peat returns on a new contract. Cesar Ruiz will start at center as a rookie, Erik McCoy will move from starting centre to right guard. The Saints' two tackles are very talented, which gives Payton some freedom with his play designs. He can trust his offensive tackles to hold up on the edges while he releases all five receivers into routes.

The Ravens had the best offence in the NFL last season.

Nothing about Lamar Jackson's skill set or performances suggest he's going to regress. He has the foundation of a great quarterback and seemingly the mindset of one too. The Ravens' success will be determined by the difference between the drop-off that comes with losing Marshal Yanda versus the gains that come from the development of Marquise Brown and Miles Boykin. Not to mention, the potential for 16 fully-healthy games out of Mark Andrews.

DeSean Jackson barely played for the Philadelphia Eagles last year. Alshon Jeffery wasn't around by season's end either. The Eagles enter this season with a strong offensive line, great coaching from Doug Pederson and a re-tooled set of skill position players. Jeffery and Jackson are supremely talented. When healthy, they'll be complements to Zach Ertz, the Eagles' superstar tight end.

The Eagles have mismatch receivers, an offensive line who can block anyone and a quarterback capable of great performances when fully healthy.

Rounding out the top tier of the NFL's offences is the San Francisco 49ers. Kyle Shanahan builds great offences everywhere he goes. Losing Emmanuel Sanders hurts because of their lack of experience at wide receiver, but George Kittle and Deebo Samuel are fine leading men in the receiving corps. Keeping Joe Staley would have made the Trent Williams trade even better, but getting Williams to start at left tackle instead of left guard is still a massive coup.

Williams is one of the best players in the NFL. He didn't play for Washington last year because of how they mismanaged his cancer diagnosis. Williams is a great run-blocker who diversifies the running game with his athleticism. He and Kyle Shanahan are a perfect match for each other.

In truth, the 49ers should be higher up on this list but they just don't have a quarterback capable of matching the performances of the others. It's the reason Mahomes was able to overcome the 49ers in the Super Bowl. Garoppolo didn't show up, so it didn't matter that the rest of the 49ers roster outperformed their counterparts.

On the other end of the scale, the New York Jets figure to have the worst offence in the league.

Sam Darnold hasn't developed when he's been on the field. Injuries have impacted him, but decision-making and accuracy have been even bigger problems. Darnold is still very young, but that's the only reason for optimism at this point. Adam Gase has proven his own limitations over and over again, while the offensive line is majorly lacking in talent.

The Bears are the surprise team in the bottom tier. And it's not just Mitchell Trubisky.

Matt Nagy is fortunate that his quarterback is such a contentious figure in Chicago because Nagy's play-calling has been disastrous so far. He has many of Andy Reid's play designs, but not the same ability when it comes to game-planning or play-calling discipline. The Bears also have one of the worst offensive lines in the league, while adding Jimmy Graham and Ted Ginn to take up snaps on offence. Not much has gone right in Chicago outside of the Khalil Mack trade.