It's Week 8 in the NFL season. The Cincinnati Bengals upset the Baltimore Ravens last week. Are they now the favourites in the AFC North?

Ja'Marr Chase continues to rip up the record books in his first NFL season. He took center stage as the Bengals upset the Baltimore Ravens 41-17.

In Joe Burrow, Tee Higgins, Joe Mixon and Ja'Marr Chase, the Bengals may have something.

When Burrow tore his ACL towards the end of his rookie season, the Bengals outlook was bleak. It wasn't just an ACL tear. It was a devastating knee injury that was hard to watch back. When the Bengals drafted a wide receiver in the top five who dropped every other pass sent his way during the preseason, everything got bleaker.

But so far Burrow has shown no signs of his injury. Ja'Marr Chase has no question marks. In fact, Chase has answers for everything that NFL defences have thrown at him. Nobody has been able to stop him.

He beat the Ravens so bad in Week 7 that Marlon Humphrey took a solemn tone afterward.

The question for the Bengals now is just how good can they be? The NFL is weird in that teams get upset all the time. It doesn't mean that one team is automatically better than the other. For example, the Ravens lost two offensive linemen between their big win over the Chargers and their loss to the Bengals. They may need a few weeks to figure that out.

So the Bengals could play the Ravens at the end of the year and face a completely different challenge.

Regardless of what happens with the Ravens, the talent on the Bengals offence means they should at least push for a playoff spot. They're currently first in the AFC at 5-2. The Ravens are also 5-2, with the Browns one game back. So long as the key pieces stay healthy, they'll make the playoffs for the first time since 2015.

Aaron Rodgers is always hard to bet against. Especially if you give him 6.5 points.

But Covid has hit the Packers and the Cardinals are the last remaining undefeated team in the NFL.

Atlanta Falcons -3 over the Carolina Panthers

Sam Darnold was only one of many problems that the Panthers had last week. This team has come apart at its seams and isn't likely to rebound. It's an indictment of just how bad the Falcons are that they're only three-point favourites at home.

Mike White is expected to start in place of the injured Zach Wilson. White may start the game but Joe Flacco will probably finish it. Flacco was acquired in a trade this week. Whenever you're 1-5 and acquiring Joe Flacco, things are bad. Things are very, very bad.

Dan Campbell coached like he was trying to save his job last week. Fake punts, surprise onside kicks and every possible trick in the book was pulled out. The shock the Rams endured shouldn't reoccur this week and the Texans are ripe for punishment. The Texans have lost games by 26, 28, 40 and 15 points this season. It's Week 8.

Buffalo Bills -13.5 over the Miami Dolphins

Don't buy Tua Tagovailoa's numbers. He was his typical checkdown merchant last week against the Falcons. The Bills have a better defence that will take advantage of his weaknesses, leading to even more turnovers and more negative plays. Meanwhile, the Dolphins defence is a complete departure from what it was during Brian Flores' best times in the job.

The Bills will only fail to cover if Josh Allen beats himself.

Detroit Lions +3.5 over the Philadelphia Eagles

Dan Campbell may have successfully energized his team last week. They didn't win the game, which may have sapped any energy he created. Either way, the Eagles are bad enough to offer the Lions their first win on the year. Campbell makes the NFL more ridiculous and entertaining, so he needs to win enough games to stick around for a while.

“That's a joke to me. I got one of the best jobs in all of professional sport. ... There's not a booster with a big enough blank check"

Cleveland Browns -3.5 over the Pittsburgh Steelers

"I got one of the best jobs in all professional sports."

Mike Tomlin impressively dismissed a link to a college job this week. It's true that Tomlin has one of the best jobs in sports. His job security is impenetrable and he will be the Steelers head coach for the next 30-40 NFL seasons if he wants to be. But he no longer has one of the best quarterbacks in football. And that was emphasized last week when the Steelers scraped past a bad Seattle Seahawks team.

Kyle Shanahan is under scrutiny. His quarterbacks are even more so. Shanahan doesn't know who will start next week, the assumption is that Jimy Garoppolo will but that's only because he's healthier than Trey Lance. That's not an ideal way to run an NFL team.

The 49ers have lost their identity on both sides of the ball. The Bears have found theirs with Justin Fields.

Fields has played like a rookie. He's had good moments and bad moments. He was predictably beaten up by the Tampa Bay Buccaneers and won't have it easy against the 49ers either. The Bears only need him to make enough plays this week, whereas last week it was a challenge to make any plays.

Tennessee Titans -1 over the Indianapolis Colts

Jonathan Taylor is outstanding but Carson Wentz is still making stupid mistakes. The Titans could turn around and lose this game after last week's big win, but it would be a surprise.

Jacksonville Jaguars +3.5 over the Seattle Seahawks

This game couldn't be less interesting. Maybe Trevor Lawrence has a big outing and excites anyone who dares to watch it. If you're an NFL fan, do something else with your Sunday.

The Patriots will run the ball to keep this game close. They might even get some turnovers and sacks against Justin Herbert. But Herbert will eventually take over and the Chargers' talent will shine through. It's a lopsided game between a contender and a team trying to build around their rookie quarterback. 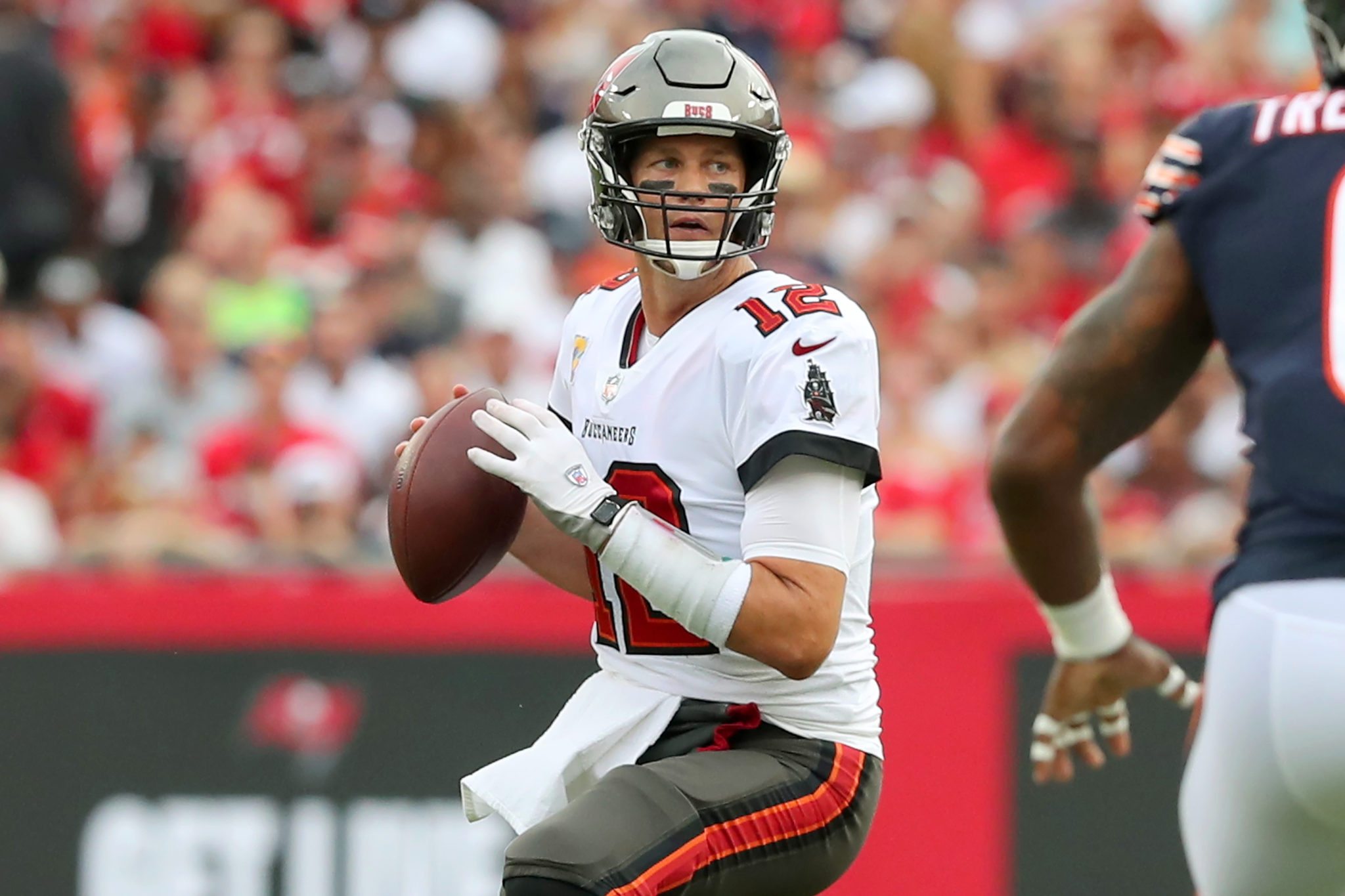 Mike Evans caught three touchdowns last week. He's typically quiet against Marshon Lattimore so don't expect to see him as much this week. The Buccaneers won't care because they have so many weapons that Brady will just look elsewhere. It doesn't matter who they lose, even with Rob Gronkowski, this team is far superior to any of its competitors in the NFL right now.

Teddy Bridgewater needs a big game to turn this Broncos season around. But Chase Young and his friends will be all over him while Taylor Heinecke does enough on offence to win the game. Terry McLaurin and Antonio Gibson will make enough big plays together to win a low-scoring NFL game.

Dallas Cowboys -2.5 over the Minnesota Vikings

Outside of Dalvin Cook having a huge game, as he's done against the Cowboys before, it's hard to understand why this line is only 2.5.

The Chiefs probably shouldn't be favoured by 10 points against anyone. They're not a good team. But they do still have Patrick Mahomes and the New York Giants are an awful team. The Giants won't get the pass rush that previous teams have to shut down the Chiefs passing game. Expect big performances from Travis Kelce and Tyreek Hill, potentially sparking a turnaround for the biggest disappointment of the NFL season so far.