The first of those losses was the Minnesota Miracle. Stefon Diggs scored a touchdown on a hail mary to win the game at the end. Brees wasn't on the field for the losing of that game, though he also didn't play well through its four quarters. He was a reason the game was still close at the end.

That was also a road game.

In each of the last two seasons, the Saints have finished the regular season with a 13-3 record. They were the better team in each of their playoff losses, they matched up favourably to their opponents, had the better quarterback and got to play at home. The problem is, for each of the last three seasons, Drew Brees has been a great regular season quarterback who has gradually worsened as the season has worn on. He's old.

Brees will be 42 during this year's playoffs. The Saints re-signed him to a two-year, $50 million deal this offseason. They also made astute moves to bring in Emmanuel Sanders and Cesar Ruiz to improve his supporting cast. The Saints have one of the best rosters in the league. Their overall age profile is good and their coaching staff is outstanding. The Saints should be up there alongside the Kansas City Chiefs and Baltimore Ravens as one of the best teams in the league. They're not even really on that second tier where the San Francisco 49ers have to carry Jimmy Garoppolo.

For the full season last year, Drew Brees ranked first in raw accuracy. He was accurate on 83.2% of his pass attempts. When you adjust for the depth of his throws, he ranked third. He was the second-best underneath passer and the fourth-best intermediate passer. His deep ball was his only consistent problem. He had the sixth-worst deep ball in the NFL last year.

Against the Vikings in the playoffs, he was accurate on 83.3% of his passes but his depth-adjusted accuracy was 56.3%. Down from 67% for the full season. He had two interceptable passes and three throwaways while throwing 22 of his 30 qualifying passes fewer than 10 yards past the line of scrimmage.

That's been the theme for Brees. He becomes sloppier and less accurate after three months of throwing. Last season he got an enforced break during the season, but a thumb injury hardly helped him for the long run.

It's possible that the Saints win the Super Bowl this year. But it's extremely unlikely that Drew Brees is the reason they win the Super Bowl. The Saints haven't asked Brees to carry the offence for a long time. From 2010 to 2016, he threw more than 600 passes in each regular season. He hasn't come close to that over the last three years, though he may have if he stayed healthy last season.

Beating the Chiefs or Ravens in any potential Super Bowl matchup would require some luck. The bigger obstacle for the Saints is beating the 49ers. The Saints need to win by making Brees a complementary piece. They need to have an effective defence and strong running game that they can pass off of. The problem is the 49ers are better than every other team in the league at winning that way. For the Saints to overcome the 49ers in the postseason, they'll need Brees to be significantly better than Garoppolo.

When they faced off against each other in the regular season last year, Kyle Shanahan treated it like a playoff game. He emptied his bag of tricks and threw everything he could at the Saints. They ultimately won a shootout with George Kittle making the decisive play at the end. Garoppolo didn't need to play well for the 49ers to win.

With Tom Brady, Russell Wilson and Aaron Rodgers also likely to be on playoff teams, as well as the Dallas Cowboys and Arizona Cardinals hoping to take steps forward into the playoffs, the NFC is stacked. In a best-case scenario, the Saints get a first-round bye and only need Brees to play well for three games. In a worst-case scenario, he has to play 20 straight games to win the Super Bowl.

If we just take the final three-game sample from last season, it's a bleak outlook.

This is the first of three interceptable passes Brees threw against the Tennessee Titans in Week 16. It's a perfect example of the type of throw that Brees struggles to make later in the season. The ball is deflected away from Michael Thomas by the underneath defender at the 53-yard line. That underneath defender should never have been a factor in the play. 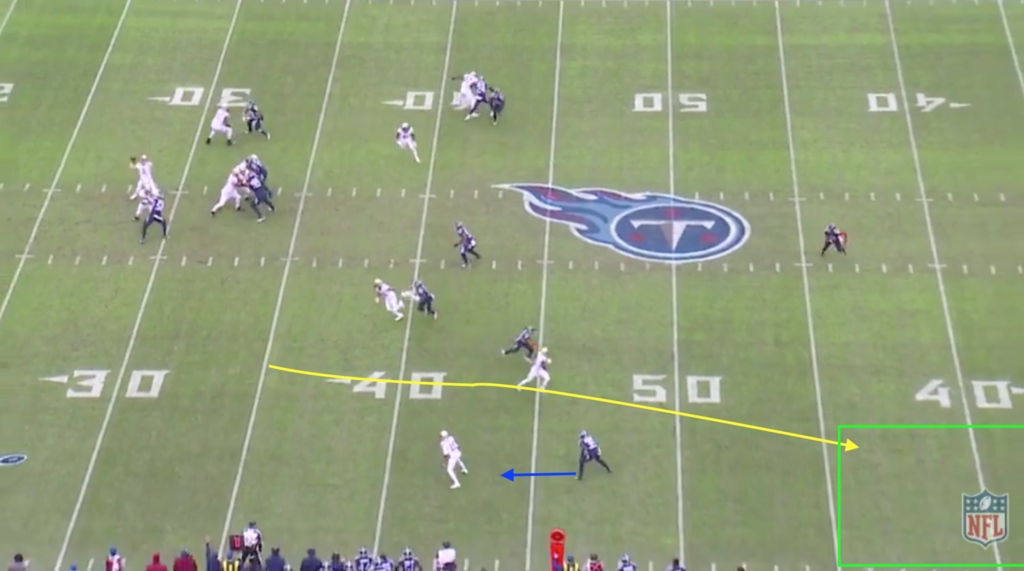 Before putting the play in motion, this image shows what Brees saw when he chose to throw the ball. It was a good decision. He made it at the right time too. The ball needs to arrive deep into the green box. Michael Thomas released from the slot, so he had space to his outside, and he stayed vertically through the initial stage of his route to maintain the space outside.

It's a great route from Thomas and Brees has a clean pocket. This is textbook play for the Saints offence.

Instead of stopping and turning around to catch the ball into his chest at the 54-yard line, Thomas should have never broken stride to catch this ball over his shoulder around the 40-yard line. The deep safety coming across the field is a good measure of where the space was.

A big factor in this throw failing to reach its destination is where Brees threw it from. In the image, you can see that Brees is closer to the far hash mark than the near hash mark. Quarterbacks who can't throw outside the numbers from the far hash limit the whole offence. They're easier to bait into bad throws and they have to be extremely accurate while playing in a tighter field.

Arm strength shows up in different ways. When a quarterback is straining more to generate velocity, he loses control of his placement and this often manifests itself in the ball floating. A quarterback who overthrows touch passes is often suffering from arm strength problems. It seems counter-intuitive, overthrowing a ball because of a lack of arm strength, but touch throws are more like manning mortars rather than shooting rifles.

Touch throws require perfect control of the ball and precise placement into tight windows. When you're off by a degree in either direction, the ball will get away from you and can float high above its intended target. That's what happened on this play.

Brees' third interceptable pass in this game came when he badly underthrew a wide-open Ted Ginn in the endzone. It was a deep ball shot play where Brees' pass fell more than five yards short of its intended target.

He repeated that failure the following week.

When Patrick Mahomes is late to get through his reads or release the ball, a rarity for him, he can make the ball catch up by putting more on the throw. Brees has no margin for error. His pass has to come out at the perfect time because he can't throw fastballs anymore. Any defensive back with a chance to undercut the throw will reach the ball in time.

On this play, Ted Ginn is wide open running toward the sideline. Brees' pass carries upfield more than he wants it to, allowing the free safety to come underneath it and drop an easy interception.

Those throws foreshadowed the one interception Brees had over his final three games last season.

It was another underthrown deep shot in the direction of Ginn. It's underthrown, but it's primarily a result of misreading the coverage. Anthony Harris, the intercepting player, is in position to play this ball from the start. Ginn needed the ball to reach the 20-yard line to have a chance. Brees released it from his own 20-yard line, he can't throw the ball 80 yards with sustained velocity.

Tom Brady has worked around his diminishing arm strength with greater success than Brees. His supporting cast has mostly been better but, more importantly, his style of play fits more easily. Brady's brain has always been slightly sharper than Brees'. He makes fewer mistakes on a baseline level.

Brady's rate of mental errors has gone up over the latter stages of the season in recent years. So has Brees'. This interception was a similar mistake to the one that ended the Saints season 12 months prior.

In overtime against the Rams, the Saints had the ball in their own territory facing a Second-and-16. There were more than 14 minutes left in overtime, so there was no reason to force any decisions at this point. Brees is hit as the ball comes out on this play, but he begins his throwing motion extremely late. He can see the defender in front of him, he should never throw this ball.

He does. It's intercepted. And the Rams go to the Super Bowl.

That's the type of mental error, a slight hesitation, that becomes more prevalent in older quarterbacks at the end of the season. They can rely on their sharpness to put up big numbers at the start of the season, but playoff games are against the best of opponents when your body has taken a beating. Few quarterbacks have successfully played into their 40s in the NFL, recent evidence suggests that's not going to change much moving forward.

The Saints weren't in an easy position this offseason. Moving on from Brees would be a tough sell. It's not like he fell off in an obvious way. Teddy Bridgewater, Brees' heir-apparent last season, played relatively well when he started last season. He's now the Carolina Panthers starting quarterback while Sean Payton talks up special teamer Taysom Hill as his future starter.

Chances are, the Saints will have another decent season but their Super Bowl window is closed.

Read more quarterback breakdowns on Off The Ball:

Baker Mayfield will be a liability again in 2020.