Baker Mayfield will be a liability again in 2020

Cleveland Browns quarterback Baker Mayfield was supposed to be a superstar last season. Instead, ...

Baker Mayfield will be a liability again in 2020

Cleveland Browns quarterback Baker Mayfield was supposed to be a superstar last season. Instead, he fell by the wayside as Lamar Jackson ascended to the top of the NFL quarterback totem pole. Mayfield will have his third new head coach in his third season in 2020 and as much as things change, they are likely to stay the same.

Baker Mayfield became the NFL's golden boy last offseason. All it took was a rookie touchdown record for the Cleveland Browns hype to take off. First, there was the ESPN profile. Then came the GQ profile. By season's start, the Browns were a shoo-in for the playoffs and only Patrick Mahomes was a bigger favourite than Mayfield to be the league MVP.

Even before the season began, the Mayfield hype was a problem. The second-year quarterback angered teammates when he publicly ripped Duke Johnson during his contract dispute. It was just the most notable of many manifestations of Mayfield's ego in the public spotlight. Whether it's planting a flag at midfield in college, purposely targeting Hue Jackson on the Bengals sideline or constantly battling Colin Cowherd, Mayfield can't stay away from being an antagonist.

None of that actually matters. It only matters when it manifests itself on the field. And for all of Mayfield's brashness in the media, it's a lack of brashness in the pocket that was his downfall last season.

Mayfield broke the rookie record for touchdown passes in Freddie Kitchens offence. Kitchens took over for Hue Jackson midway through Mayfield's rookie season. Jackson had asked Mayfield to be a prototypical dropback passer, something the rookie wasn't ready for. Kitchens streamlined the Browns passing game. He asked Mayfield to do less by relying more on play-action, misdirection and half-field reads. The passing game became a complement to the running game.

Even then though, the only real evidence that Mayfield could be a great quarterback was the touchdowns. Touchdowns are an unreliable tool of evaluation. Since 2010, amongst quarterbacks within their first two seasons in the league, Blake Bortles has the third-most touchdowns in a single season. He threw 35 in 2015. Quarterbacks such as Derek Carr, Jameis Winston, Nick Foles and Josh Freeman have all thrown for 25+ touchdowns during the early years of their careers. None became stars after.

Kitchens became the Browns head coach on the back of that rookie record. He was seen as the saviour after Hue Jackson had held Mayfield back.

Kevin Stefanski is the new saviour, now Kitchens is being blamed for holding Mayfield back. It's a common occurrence in the NFL. The Detroit Lions have been doing it for more than a decade with Matthew Stafford. You misdiagnose the problem, blaming everything except the quarterback when something goes wrong, leading to the chairs constantly being rearranged on the ship before it hits the same iceberg each season.

During his rookie season, Mayfield ranked 32nd in accuracy and had the 22nd-ranked interceptable pass rate. His touchdowns were papering over poor performances each week. Even in the context of being a rookie, his performances didn't suggest he was a burgeoning star.

So the sudden demise wasn't surprising.

Mayfield finished his second season as the 21st-ranked passer in the league. He was the third-worst passer in the underneath range, the worst in the intermediate range and the 11th-best on deep throws. He was overly-reliant on his deep ball. Mayfield compounded his inaccuracy with the league's 23rd-ranked interceptable pass rate.

But the passing numbers alone actually flatter him. During his second season, he repeatedly broke play designs before ever giving them a chance to develop.

This example comes from the fourth quarter of the Los Angeles Rams loss in Week 3. There are two minutes left and the Browns need a touchdown to tie the game. Mayfield drops back in the pocket and barely reaches the top of his drop before abandoning the pocket. He's running away from pressure that doesn't exist. The pressure that comes in the flat is a result of Mayfield breaking the design of the pass protection. His offensive line is protecting the middle of the pocket, not the right flat.

When Mayfield breaks the design of the pass protection, he's also breaking the timing of his routes. When he runs into the flat, he cuts the field in half. With no space to throw into, he throws the ball away. That doesn't count as a missed throw.

It does count as a missed opportunity. 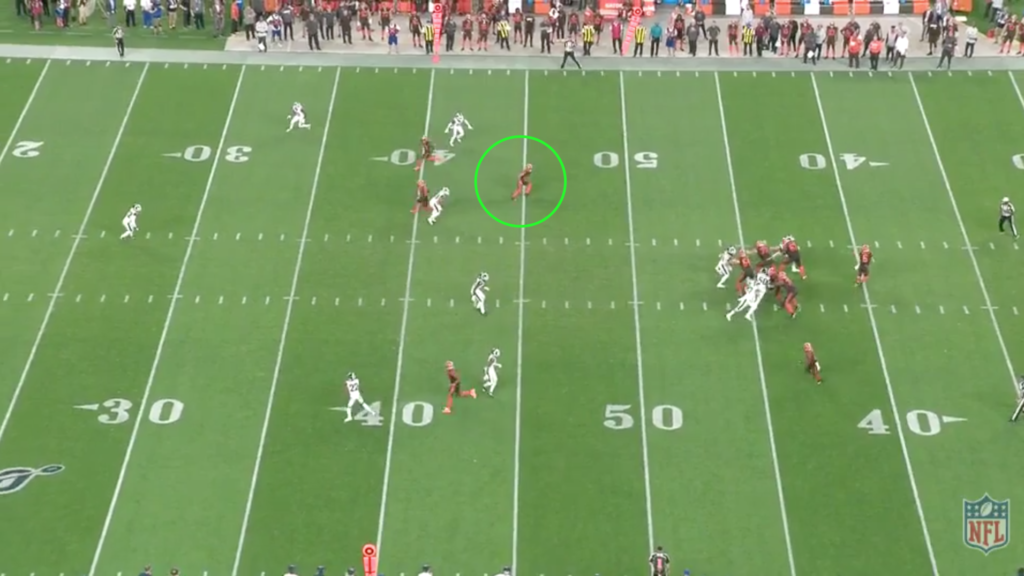 When Mayfield left the pocket, he had a curl route open underneath. His vertical options hadn't had enough time to get downfield. It was First-and-10 so a five-yard gain immediately before the two-minute warning wasn't a bad option. This play came just two minutes after Mayfield made the exact same mistake to run into a sack on third down.

This was on the previous drive. It was Third-and-10. He was under no pressure after holding the ball in the pocket, but panicked and ran sideways into a sack near his own endzone. This is the type of play that was blamed on the offensive line when those players did nothing wrong.

Instinctually, Mayfield runs into the right flat when his first option isn't open. Sometimes he runs into the right flat when it is open. He lacks clarity of coverage and his response is to move his feet rather than his eyes. Good quarterbacks allow their feet to follow their eyes. Lamar Jackson just won an MVP in large part because of how exceptional his footwork and discipline within the pocket is. Plays are designed to work with the quarterback in the middle of the field. When he leaves that spot prematurely, plays break.

This Rams' loss finished with Mayfield throwing an interception on fourth down because he refused to step up in the pocket, as shown above.

Cousins has the same penchant for self-inflicted wounds that Mayfield showed off last season. The Vikings minimized them by putting him in an excessively run-oriented offence. Cousins threw from under centre more often than any other quarterback. Only Jimmy Garoppolo used screens/threw off play-action more often than him. Stefanski, then Vikings offensive coordinator and now Browns head coach, alleviated the pressure on Cousins by avoiding straight dropbacks as much as possible. He asked Dalvin Cook to carry the offence, he'll ask Nick Chubb to in Cleveland.

Shifting the offence away from spread formations and straight dropbacks means limiting how much of an impact Odell Beckham and Jarvis Landry can have on games. The Browns are asking the quarterback to do less by having a less expansive, less diverse passing game. They won't just run the ball more often, their passing plays will be run-oriented too. This means lowering their ceiling as an offence to raise their floor.

An approach that fits the epidemic that has taken over the Browns since the firing of Sashi Brown. The Browns are in a rush to get back to 8-8, from where they'll hopefully sneak into the playoffs and maybe win a playoff game. It's what the Vikings managed to do last season. Sashi wanted to bottom out to rebound to the top of the league. The Browns owners fired him when their patience ran out prematurely.

Keeping Mayfield and bringing in Stefanski guarantees that the Browns will be second-best to the Ravens again next season. But they're not even guaranteed to be second.

The dark secret from Mayfield's second season was his inability to execute simple concepts. Mayfield isn't guaranteed to be able to execute the plays that Stefanski calls. Kitchens did help his quarterback often, his quarterback just couldn't help himself.

Against the Steelers late in the second quarter, Kitchens attempted to give Mayfield an easy drive starter. This is an RPO. That stands for Run-Pass Option. Mayfield has a straight forward read, he either hands the ball off or throws it outside depending on what the defence does at the snap. After making his decision to keep the ball, Mayfield wildly misses the slant.

Missing slants was a theme.

On this play, he has a straight-forward read of the linebacker in his passing lane. The play fake doesn't draw him out of position, so Mayfield should hold the ball to clear the first passing lane. He instead just throws the ball straight to the defender he's supposed to be reading.

For this Third-and-5 play, the run threat isn't there. The Bengals blitz. Kitchens used a 3x1 alignment, isolating one receiver on the narrow side of the field. This gave Mayfield an easy read against man coverage. He should hit the slant here, but instead, he wildly overthrows his intended receiver.

Mayfield was the second-worst passer in the 1-5 yard range last season. A quarterback who can't hit slants consistently or check the ball down accurately isn't capable of making any throw consistently.

Stefanski's offence last year was taken directly from Gary Kubiak. The Vikings added Kubiak after he parted ways with the Denver Broncos last offseason. Kubiak is a Super Bowl-winning head coach who is now the Vikings offensive coordinator. He became one of the best coaches in the NFL by elevating Matt Schaub with a run-oriented, play-action heavy offence. Mayfield will execute more aggressive play fakes from under centre next year than he did last year. Bootlegs will be prevalent.

It's for that reason that Mayfield is reportedly cutting weight this offseason after adding weight last offseason.

A reason to be optimistic about Mayfield in this new offence is his accuracy splits from last season. He was the 27th-ranked passer on straight dropbacks last season and the 10th-most accurate passer on play-action dropbacks last season. That 10th ranking came from a fifth-ranked deep ball on play-action passes. He was in the bottom five for underneath and intermediate throws off of play-action. Stefanski will be betting on Mayfield's deep ball connecting with Odell Beckham and Austin Hooper (the former Falcons tight end who the Browns massively overpaid this offseason), while Nick Chubb does the heavy lifting.

Read more quarterback breakdowns on Off The Ball: Aaron Rodgers is still an elite quarterback.