Jared Goff is still trying to figure it out

The Los Angeles Rams are relying on Jared Goff to be a star next season, not just a passenger in their offence. Goff showed growth during the 2019 season. He needs to show a lot more growth in 2020.

Jared Goff was a disaster when he entered the NFL. His rookie season was historically bad. The worst for a high draft pick from recent memory. Goff's first year with the Rams was Jeff Fisher's last year with the Rams. Sean McVay came in and alleviated all of the pressure on his young quarterback with a quarterback-friendly scheme.

Offensive line additions gave the Rams one of the best lines in the league, a revamped wide receiver corps created wider windows to throw into and Todd Gurley excelled as the focal point of the offence.

The first-overall pick in the draft became a complementary piece for the franchise that drafted him. They reached a Super Bowl that way, but Goff was a primary reason they didn't win that game. He missed too many throws and didn't take advantage of the opportunities that presented themselves. Goff had never shown he could carry an offence when the Rams gave him a massive contract extension last offseason.

The problem for the Rams is that they've bled talent the last two years. They're no longer capable of carrying any quarterback. Goff's contract is part of that problem. Gone are Brandin Cooks and Todd Gurley from last year's team, following Rodger Saffold and Sammy Watkins from prior years. Defensively, the drop-off should be palpable in 2020 with the Rams choosing to focus on adding Jalen Ramsey to Aaron Donald instead of spreading their equity through the wider unit.

2019 was actually a step forward for Goff. He was asked to play in a pass-oriented offence as Gurley became less of a factor. His accuracy was particularly impressive. Goff finished the season as the eighth-most accurate passer in the league. He ranked 17th on short throws, eighth on intermediate throws and 19th on deep throws.

He was below average on short and deep throws, but 26.9% of his passes went into the intermediate range. That was the fourth-highest rate in the NFL, meaning it had a huge impact on his overall accuracy.

His interceptable pass rate last season was 5%. Goff had 20 interceptions dropped by defenders. Had a higher percentage of those passes been caught, the narrative surrounding the young quarterback would be completely different to what it is now. Goff would be playing for his job in 2020, regardless of his contract situation.

That's the nature of being a quarterback in the NFL. Luck has a huge impact on the numbers that are used to quantify your effectiveness.

Dropped interceptions are a symptom of Goff's problem. He makes far too many mistakes to be considered a net positive starter. Mistakes in the NFL don't only manifest themselves in interceptions. Quarterbacks can make mistakes by throwing to the wrong receiver, missing an open throw, throwing the ball away unnecessarily, failing to move your feet in the pocket, not properly reading through a progression or taking too many sacks.

It's easier to be an effective quarterback in a play-action heavy offence because it simplifies the quarterback's progression and often takes him out of the pocket. A straight dropback offence gives the quarterback less coverage definition and forces him to figure out where to go with the ball with the whole field available to him.

Goff's most egregious example of mismanagement came in Week 16. He unnecessarily threw the ball away five times in a row. The first of the five came at the end of the second quarter, four followed after halftime. The most impactful of those bad decisions was the above Third-and-9.

The throw required Goff to throw with anticipation, something he doesn't do often, and it required him to stand strong against an arriving hit.

Goff has very limited athleticism and doesn't take hits well. He won't stand in the pocket to deliver the ball repeatedly. This play is a prime example of how he reacts to pressure, turning around prematurely to throw the ball to nobody. While this decision protects Goff from taking any hits, the cost is more than just a missed first down opportunity.

The officials also penalize him for intentional grounding, moving the offence back 10 yards. Greg Zuerlein misses the 52-yard field goal instead of the 42-yard field goal.

On this play against the Arizona Cardinals in Week 17, McVay calls a shot play from under centre with a play fake. Goff has a simple read in a clean pocket. Robert Woods is open down the left sideline, but Goff doesn't attempt to get the ball to him. He throws it away instead. 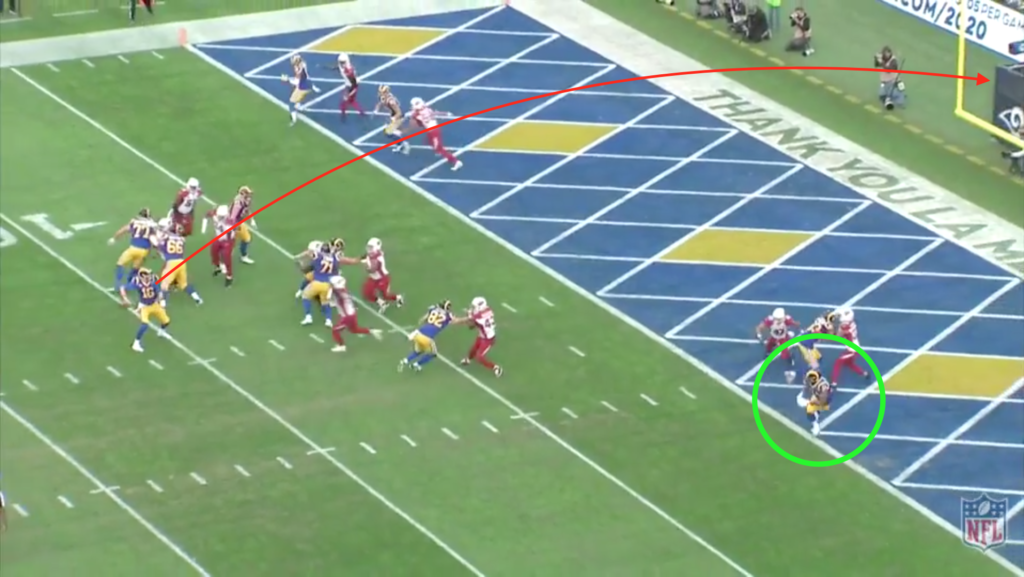 From that same game against the Cardinals, Goff missed a wide-open touchdown in the redzone. How does this happen?

The play design purposely has no receivers running routes over the middle of the field. The front-side read for Goff (the left side of the offence) has two receivers, both running sharp-breaking out routes. On the right side of the field, there is a pick play. The pick play takes a little longer to develop than the quick outs, so Goff can check the quick outs, then turn to come to the backside pick play if he doesn't like what he sees.

But Goff never turns fully around. It's a combination of two elements.

Again, we can see he's in a rush to get rid of the ball. Not only is there a fear of defenders hitting him, but that fear becomes a factor when the defender threatens to just get close to him. It hastens his process and leads to panic. The other element is Goff's footwork. He's always had heavy feet. He can't quickly shift his shoulders to face the other side of the field because he's physically limited.

So instead of whipping around to the backside of the play and releasing the ball quickly, Goff's slow, elongated process in the pocket stalls in the middle, forcing him to throw the ball away.

These plays don't count as missed passes. Intentional throwaways are a separate aspect of playing quarterback. Therefore, these plays don't negatively impact his eighth-ranked accuracy percentage. Accuracy percentage as a measurement only looks at whether the ball was accurate or inaccurate. It adjusts for depth, but it can't adjust for opportunity cost. When Goff missed last year, it was disproportionally costly.

This Third-and-8 play comes from Week 1. He has a clean pocket against the blitz and a wide-open receiver. It's a routine play where the ball sails high over Robert Woods' head.

For this Third-and-6 in Week 2, Goff has a clean pocket again and the opportunity to hit Woods as soon as he turns around. He's late delivering the ball so the defender breaks it up. But more significantly, this was a bad choice. Woods was running back into coverage and there was an open touchdown in the middle of the field had Goff come off his first read.

Goff has a tall tight end open in the endzone on a corner route on this third down. There is no pressure and he still skies it over the sideline. 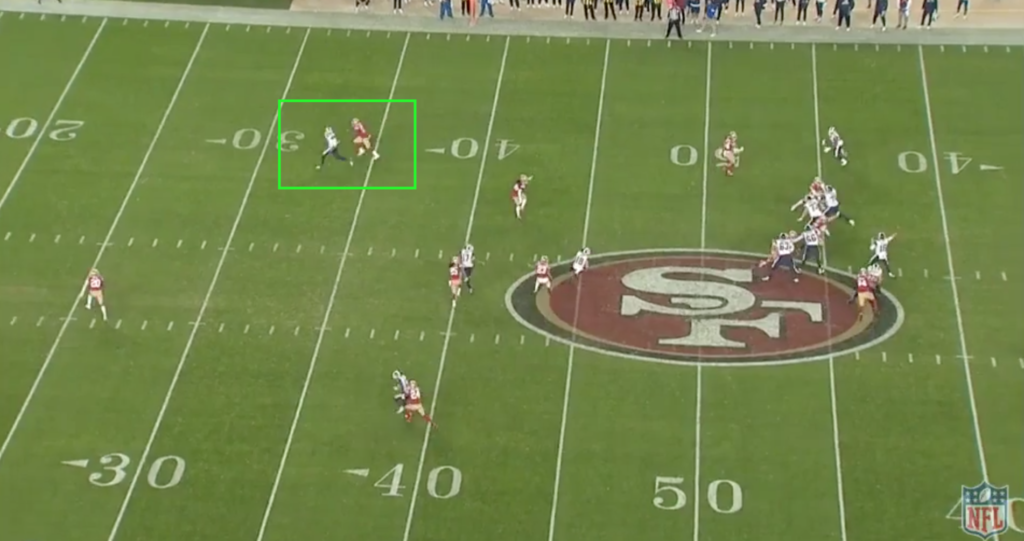 Our first look at this next play from the Week 16 game with the 49ers is an image to show the receiver Goff is looking at when he first drops back in the pocket. He's open. It's second down with 50 seconds left in the half, there's a chance for a touchdown. You take that shot every time it arises.

As a quarterback, your job is to elevate everyone and make the offence run more smoothly. You should carry the offence, the offence shouldn't carry you.

Goff simply makes too many mistakes and misses too many easy opportunities to be considered a top-10 NFL starter. He ranked 12th in Off The Ball's power rankings projecting into next season. That's mostly a reflection on the current lack of quality in the NFL outside of the top 10. With so many quarterbacks ageing out and the 2018 class missing except for Lamar Jackson, the middle class of NFL quarterbacks is lacking.

Despite his clear flaws, Goff is still streaks ahead of the likes of Baker Mayfield or Sam Darnold.

Read more quarterback breakdowns on Off The Ball:

Baker Mayfield will be a liability again in 2020.

Drew Brees is too old.

Deshaun Watson is on the precipice of greatness.

Drew Lock is worthy of his hype.

John Duggan: All or Nothing portrait an interesting window into Mourinho

Dundalk boss Giovagnoli: "Perform, do well and the history will come"